Elizabeth Jackson, also known as the mother of President Andrew Jackson currently has a reserved spot on the College of Charleston campus where her headstone is passed every single day by many. Whether the students know who it is and the history behind it is another story. She was born 1740 in Carrickfergus, Country Antrim, Ireland. She was married and had two sons Robert and Hugh (History of American Women). They all left Ireland to escape religious  persecution and settled in the Carolinas. A few years later her husband suddenly passed away leaving her with their two kids and one on the way. 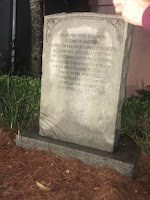 The mystery of how and why Elizabeth Jackson ended up in downtown Charleston is a question many people still do not know the exact reason behind. The students who pass the headstone daily probably come to the conclusion that somebody was buried right there, but they would be wrong. It was moved there in 1967 by men who wanted to "rescue" it from where it was originally ( This History is a Mystery).


This spot was not picked by accident. James H. Witherspoon wrote a letter to Jackson explaining where his mother was buried. The reason she was moved from where she started was because the marker was not being tended to and was not being taken care of.

She ended up passing away during the American Revolutionary War ( Waymarking). She was actually working as a nurse on a ship when she got smallpox. Another interesting fact about Elizabeth Jackson is nobody knows what she looked like or where exactly she was buried. Many people like to guess as to where she was buried but nobody really knows.

Posted by Caroline Stewart at 3:39 PM