Joshua was buried in the Kahal Kadosh Beth Elohim Cemetery which can be found on Coming Street in Downtown Charleston. This is a Jewish Cemetery. He was born in Liverpool, England on March 25th 1794. He died in Baltimore Maryland on April 24th 1870.  He was the president of KKBE from 1850 to 1861. He was an investor in the efforts to bring natural gas lightning to Charleston. He was a confederate solider killed near the end of the Civil War.

He was a man of wealth and property. He owned 20 pieces of real estate in Charleston and was also the president of a bank in Cheraw County. A known fact about him was that when Beth Elohim's new synagogue was dedicated in 1841, Lazarus presented the congregation with a silver basket he got on one of his trips to England. 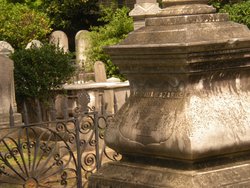 His grave marker is an obelisk with a cannon below the state and confederate flags. Lazarus's marker features a column on a pedestal. I liked the uniqueness of this gravestone and how it was placed in the front of the cemeteries entrances to show the importances he had on the cemetery. I really enjoyed learning about him on our tour we took with Randi Serrins in the cemetery. This was one of my favorite cemeteries we have visited during this semester. I liked all of the history within this cemeteries and stories told on the tour we took.

Posted by Caroline Stewart at 5:27 PM