He was a man so important in the early development of Charleston and the surrounding Carolina colony that not one but two rivers are named for him!

In England's management of the New World that would eventually become the United States, Lord Anthony Ashley Cooper (1621-1683) was appointed Lord Proprietor of the Province of Carolina by King Charles II.

With his assistant John Locke (1632-1704), Cooper went about trying to get people from Europe to move to the vast Carolina, which then stretched from Virginia to Florida.

Read more »
Posted by Patrick Harwood at 5:26 PM No comments:

Here is a review of the most common types of grave markers found in the Charleston area.
Click here if you cannot properly play the Prezi.

Posted by Patrick Harwood at 9:28 AM No comments:

Inside the Impressive Cathedral Church of St. Luke and St. Paul 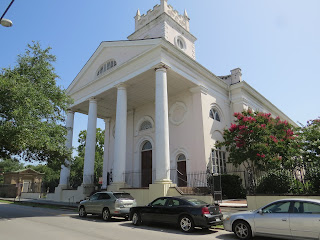 In my College of Charleston course, "Beyond the Grave: What Old Cemeteries Tell and Teach the Living," I enjoy taking my students to this beautiful church not far from campus on Coming Street.

It is the Cathedral Church of St. Luke and St. Paul, which was completed in 1815.  It is Episcopalian (formerly Anglican) and has two names because, in 1949, St. Paul's merged with St. Luke's Church on Charlotte Street.

Read more »
Posted by Patrick Harwood at 11:16 AM No comments:

Types of Grave Markers and Monuments

This Prezi shows the most common types of markers and monuments to be found at Charleston area graveyards and cemeteries.  The presentation can also be viewed by clicking here.

Posted by Patrick Harwood at 9:48 AM No comments:

Posted by Patrick Harwood at 9:17 AM No comments:

This Prezi gives an overview of how, through time, people have viewed and dealt with the deaths of fellow humans in terms of funerals and cemeteries.  This Prezi can also be viewed by clicking here.

Posted by Patrick Harwood at 10:37 AM No comments:

Writing Tips and Techniques: The Road to Better Blogging

News and feature writing are crafts. This Prezi presents many things to think about to be an effective writer or reporter.  The Prezi can also be seen by clicking here.

Posted by Patrick Harwood at 9:12 AM No comments:

How To Center Your Blog Name (Header)

By default, the name of your blog at the top (Blogger calls it the header) will be left justified. It's fine to keep it that way, but if you want to center it, go to this site and see the easy steps to do so.

On this site, scroll down until you see "Center Your Blog Header Image." Follow the steps to copy the HTML code (shown below).